Axyn Robotique, a committed #Techforgood movement player, is a French based company that not only designs but also manufactures and assembles telepresence robots. The company immensely values confidentiality and protects their client’s privacy and data policies. The company’s ability to adapt to the specific needs of their clients, and modularity, strongly differentiates them in the telepresence robot market.

In the interview conducted in December 2021, Mr. Étienne Sauvageot said, ‘A telepresence robot is considered by a user as a tool to create links.’ He further added, ‘In the education field in particular, when we asked what a telepresence robot brought to them, they said that coming back to school was easier by being a distant learner using the telepresence robot than being completely away.’

Our guest also highlighted an interesting fact that with the help of telepresence robots, the remote child can join the lectures at the scheduled hours only. The time and energy to travel to school and walk around the campus between lectures is saved. Thus, the unwell pupil can follow the medication timings according to the prescriptions of the doctors even while attending school. He also mentioned an important benefit that ‘The immersion of the students, even for about 2 to 3 hours while using a telepresence robot is observed to be higher than using video-conference applications like Zoom or MS Teams. The average noise level of the students has been reduced by 50%. While discussing the use cases of the telepresence robots in education, Mr. Sauvageot stated that the teachers who taught their students via a telepresence robot were really appreciative that they were able to manage their lectures and direct interactions by moving locally within a room between different groups of students.

While using the telepresence robot in France, data encryption and protection compliance is to be strictly followed, no third-party interference is allowed to join the user and legal owner robot interactions, no recording of videos or pictures of a public gathering is allowed unless permission is taken from everyone present in the gathering. These are a few precautions and compliances acknowledged during the interaction with our guest. These must be taken by the companies in France that are involved in the telepresence robot sector.

The conversation progressed with the insecurities from a user’s point of view. To which ‘when the purpose is understood, the fears are reduced.’ is what Mr. Sauvageot beautifully affirmed. He further explained that with proper instructions to both the end users prior to using the robot, understanding of the willingness of users to create a link between the distant pupil and the telepresence robot, providing clarity of no third-party involvement and data protection policies being met, are a few efforts that are taken to reduce the fear and ensure safe use of telepresence robots.

Mr. Sauvageot shared light on the fact that there are different rules specified for the use of telepresence robots according to the region. ‘In France, there is a rule that the state is responsible to provide education to the pupils and this regulation has positively affected the use of telepresence robots. The RGPD Data protection system regulation has also affected the system because we are not able to manage and organize our data in the systems because now the server generates passwords which are only available to the users of the telepresence robot.’

Mr. Sauvageot strongly recommends the use of telepresence robots. In the final concluding part of the dialogue, he mentioned that ‘Education sector was the first one to approach the Axyn Robotique as they felt using telepresence robots is a pragmatic solution in this area. After the feedback from the educational institutions, we realized that the benefits were not only associated with academia, but also to the physiological behaviour of the students and their universities. This was an important element to facilitate coming back from distant education.’ 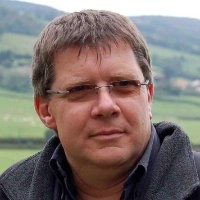 We are truly delighted and grateful to Mr. Étienne Sauvageot and Axyn Robotique for providing amazing facts and insights based on their experience on telepresence robots.

This interview was conducted exclusively for the TRinE project on 8 December 2021 by Adelina Buchar and edited by Mansi Rawal, both from the Karlsruhe Institute of Technology.