Telepresence Robots at a research event

A telepresence robot as a low-threshold offer to immerse a visitor in current research? We tried it out at the Long Night of Research to share our experiences.

Lange Nacht der Forschung (lit. Long Night of Research) is an event that takes place once a year in Austria where various participating institutions keep their doors open late into the night to present their research projects.

The TRinE project was also presented in this setting. With hands-on experience, of course.

Before the setup of the booth is presented here, the format should be described in more detail. The Long Night of Research is free to attend and is intended to provide a low-threshold (and, as experience has shown, also children and family-friendly) insight into current research. In the following field report, therefore, there are only anecdotal observations.

Our booth at the University of Krems was on the first floor from where you could see the ground floor. As is typical for fairs, we had provided flyers and candys and three laptops for use at the booth itself.

Our TR was on the ground floor and was controlled on one of the three laptops. At the same time, supervised TRs were on standby at our partners in Iceland, Germany and Macedonia until around 9 pm. 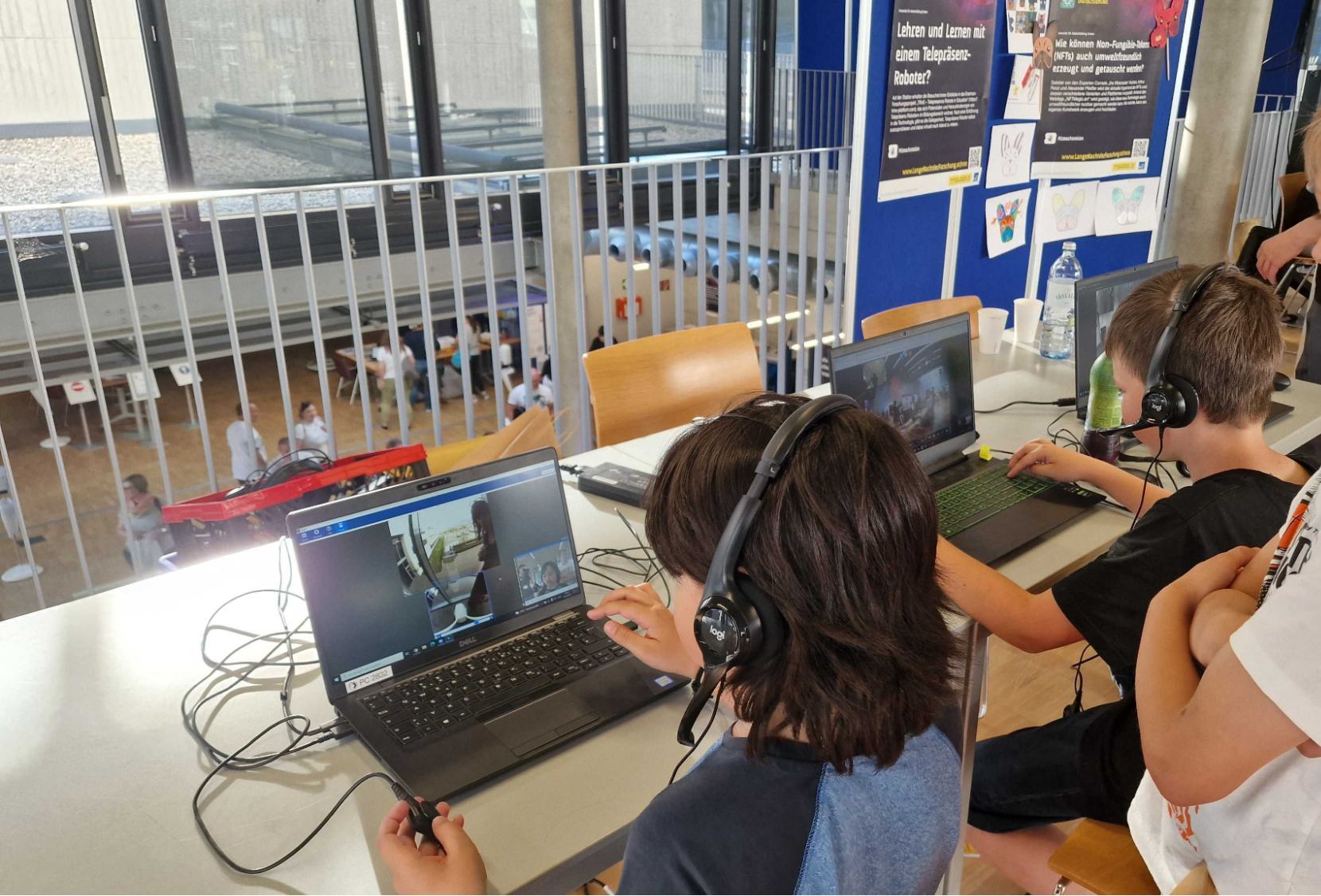 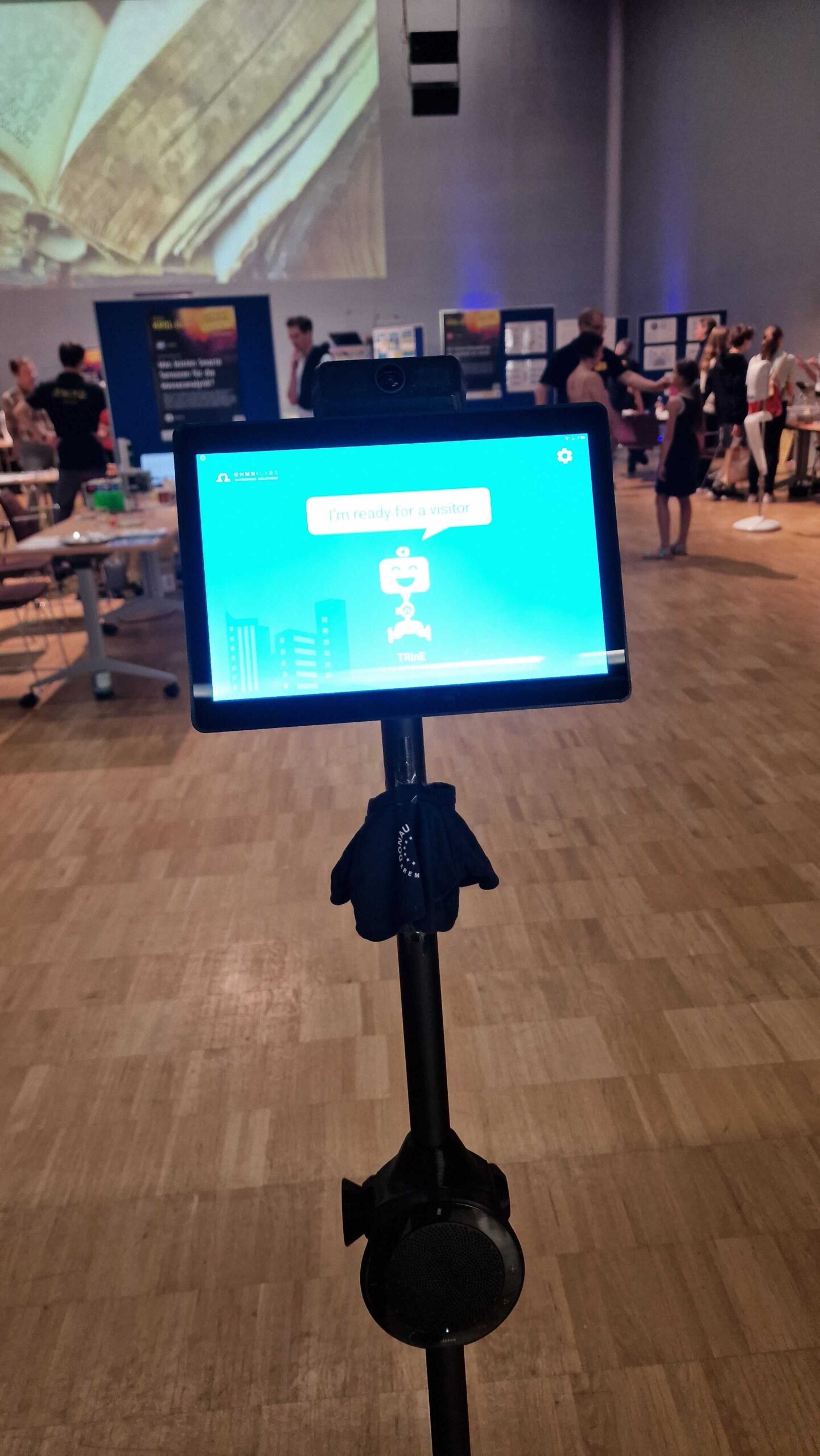 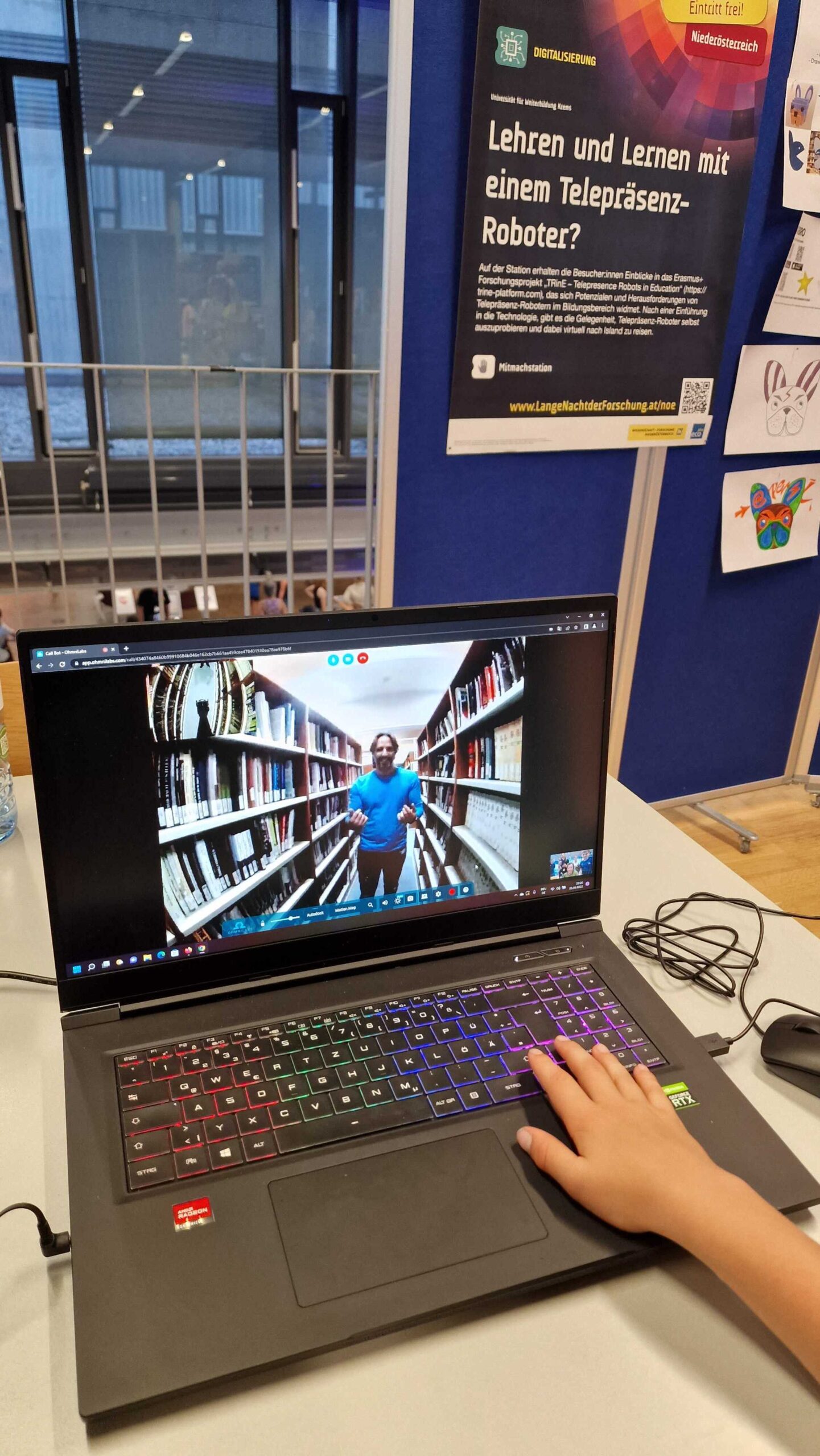 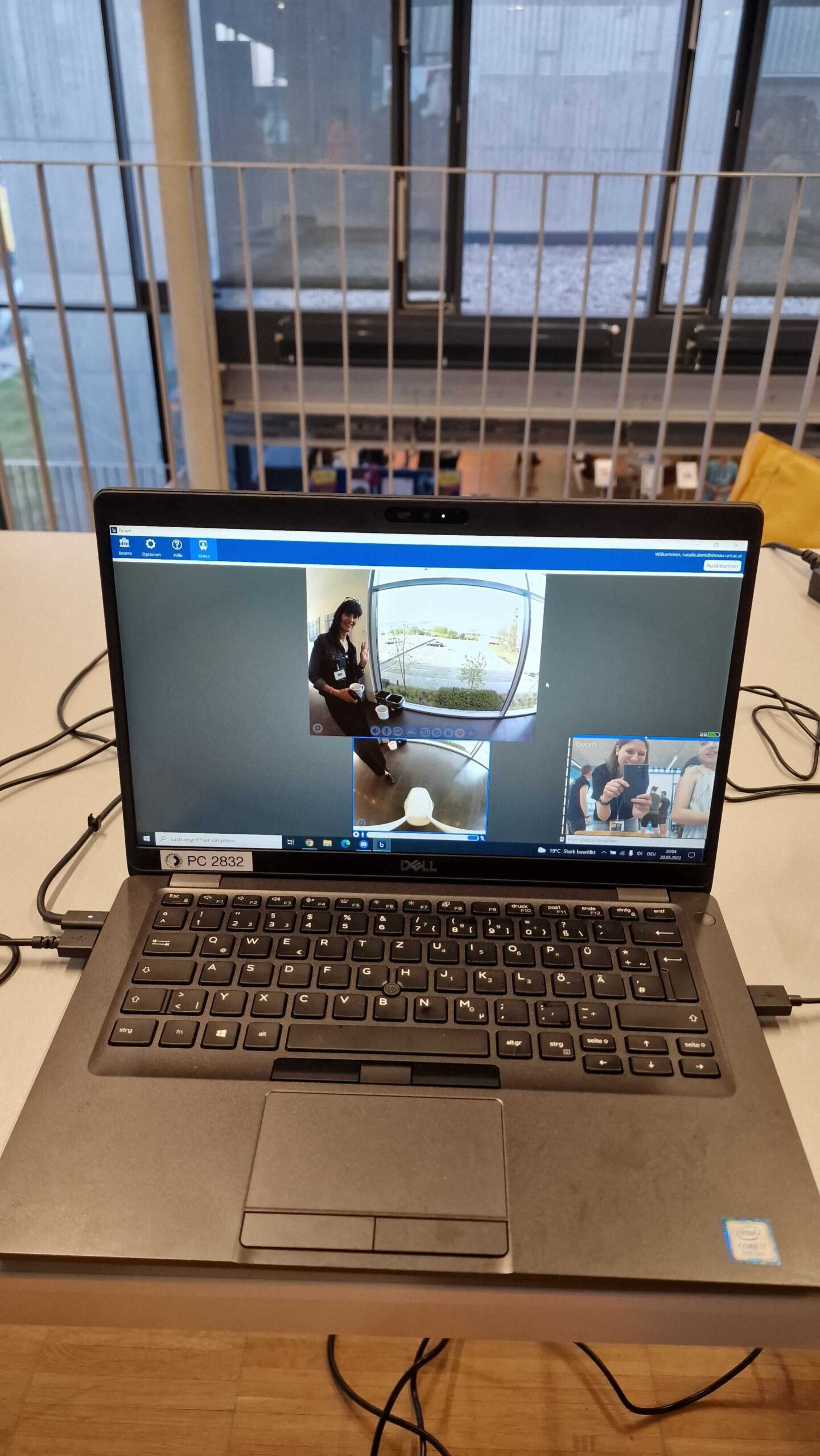 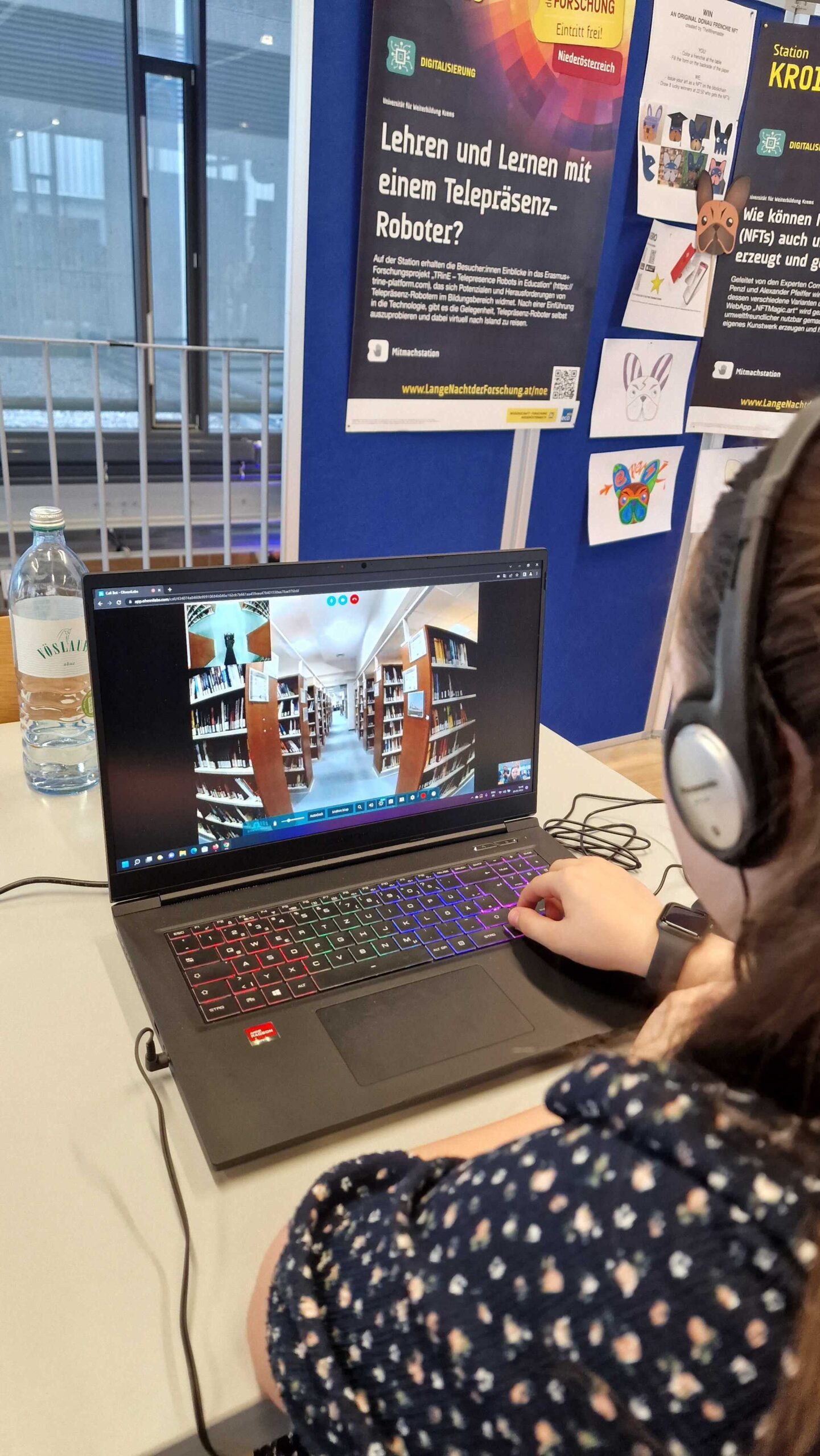 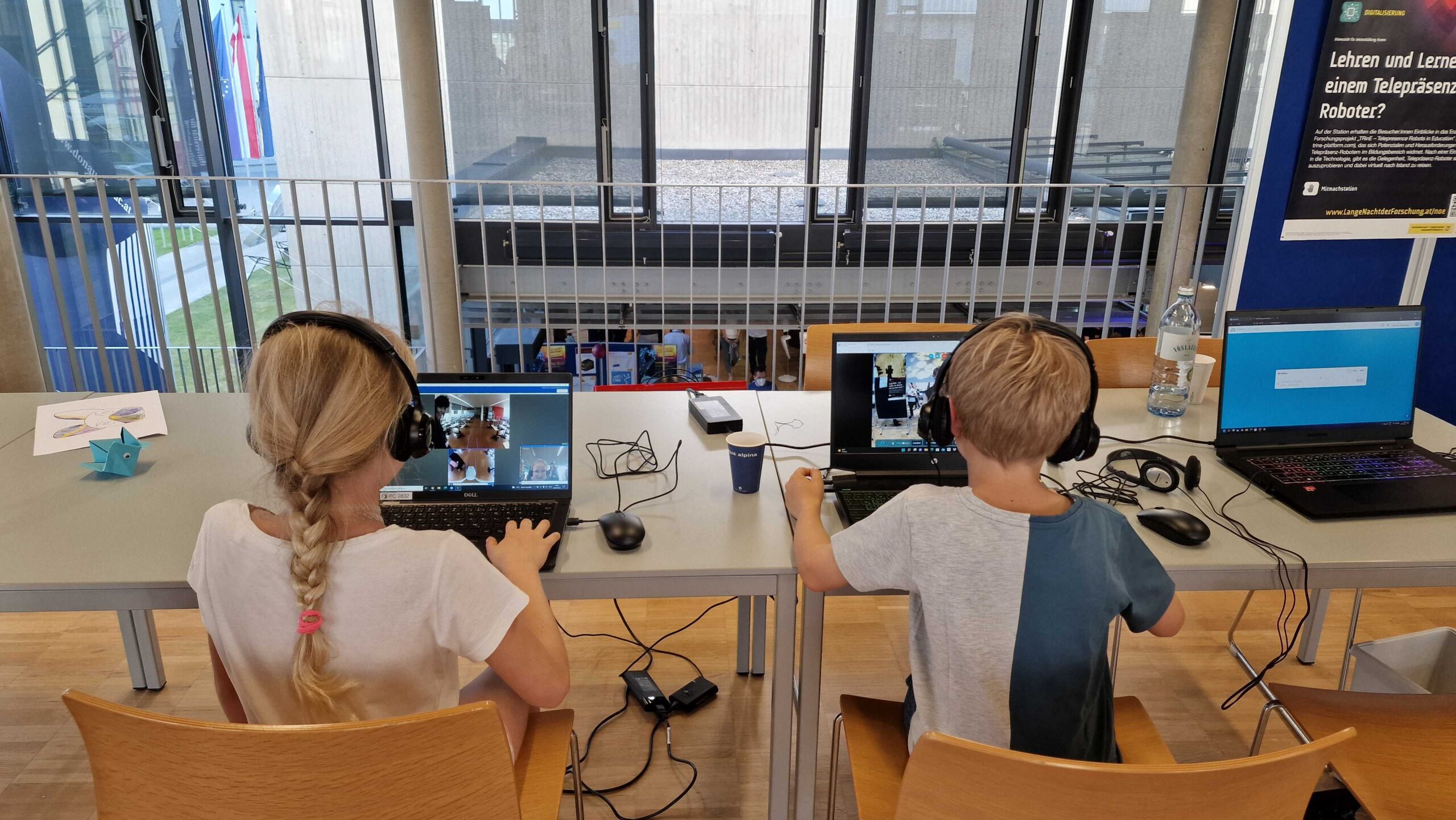 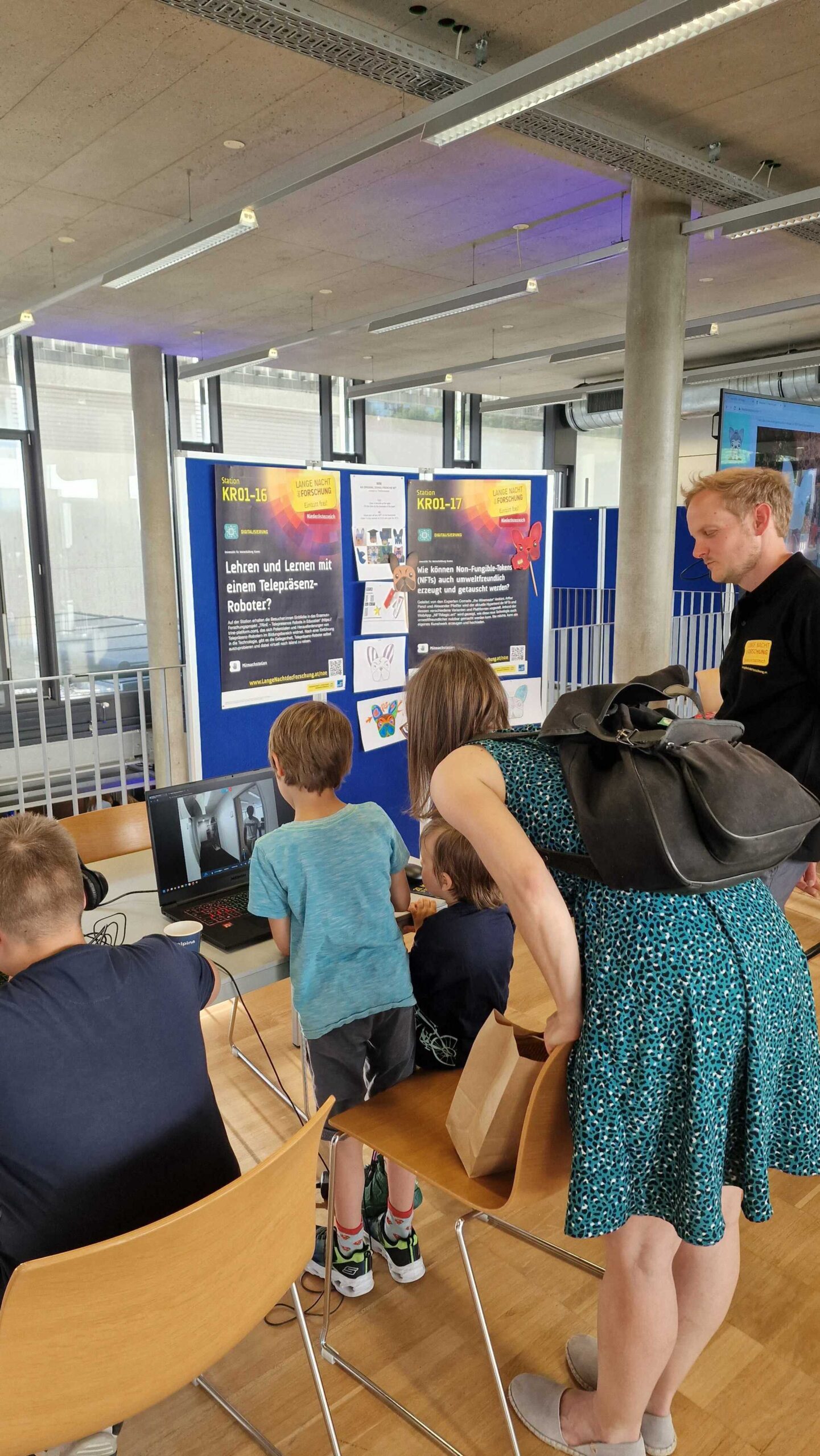 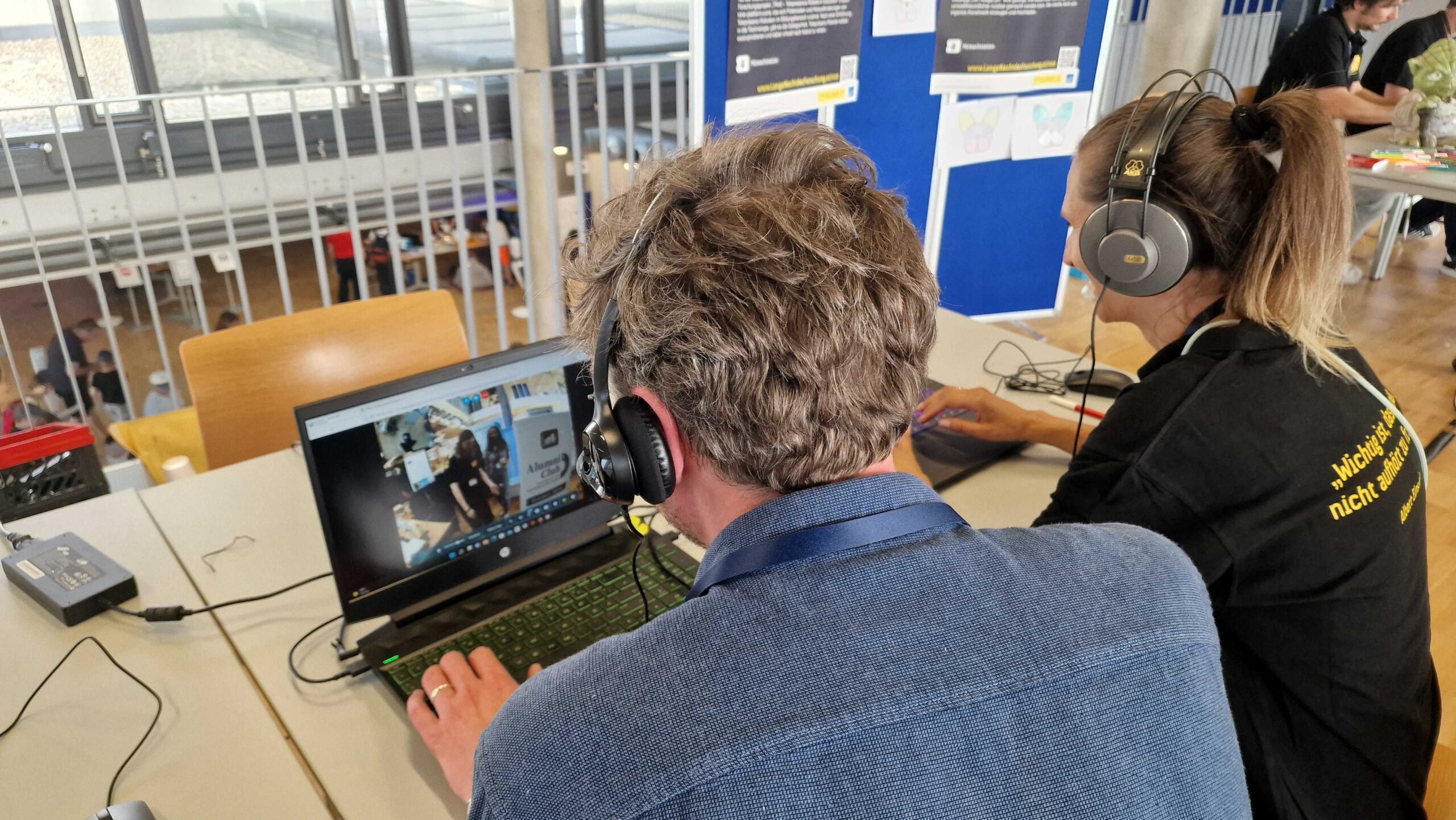 While we humans primarily had problems with the temperatures above 30 degrees and the non-functioning air conditioning system, there were also challenges for our TR on site. The Long Night of Research is attended by a very mixed audience. Especially parents with small children. Our assumption that the TR would be of particular interest to children was confirmed. For this reason, and also because there were sometimes a lot of people in the exhibition area at the same time, the TR was never on its own.

That can be noted as a first learning fact. In such a setting, a person is needed to go along with the TR to intervene in an emergency.

Such an emergency could be, for example, someone not being able to control the TR and driving into people or objects. That the internet connection is interrupted. Or that the orientation has been lost.

It was mainly the internet connection that made us decide to place the TR where we placed it. However, it turned out that for such a setting, visual contact with the TR can be an advantage. There are two reasons for this. Firstly, a TR attracts a lot of attention from people who are not familiar with it. We put a note on the TR itself asking people to try it out on the first floor together with a sketch of the room plan. And of course, the person accompanying the TR also showed interested visitors the way to our booth. Secondly, the visual contact also helped many people make the connection of how the technology actually works. Especially in combination with two other TRs abroad, it became really clear to the visitors what it means to be telepresent in real time. This may seem trivial to outsiders, but the sentence “Just like the TR down there is being controlled from up here, the TR controlled by the other computer is moving through a school in Iceland” caused astonishment several times.

Noisy crowds are not our TR’s forte. At least with our Ohmni-Bot, visitors had difficulty understanding others. The loudspeaker is loud enough to attract attention, but the TR’s omnidirectional microphone makes it very difficult to listen to a single person in a crowd. Visitors therefore automatically interacted more through gestures such as waving, shaking their heads or nodding. 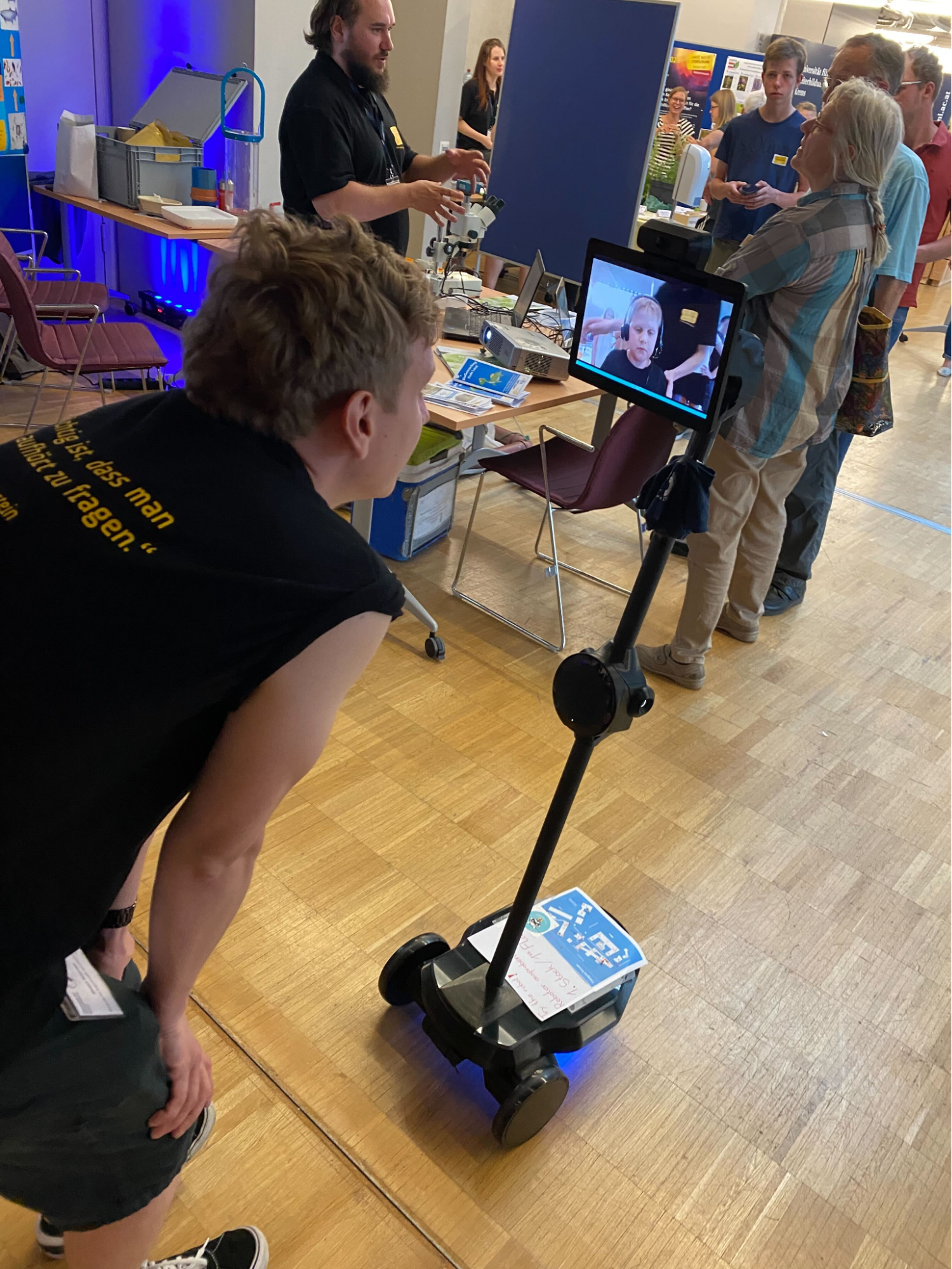 It was different with our partners outside of Austria. In a school or university environment, it was possible to talk to other people without any problems thanks to headphones. We also observed how young children spoke English without shyness and their parents looked on in amazement. In general, children had hardly any fear of contact with the TR. Therefore, it often happened that children tried out the TR while their parents asked questions about our research projects.

Here’s an insider tip on how to make the TR even more interesting (not only) for children: You have to activate the arm function. You can see how this works in the following picture. Especially players of first-person games will enjoy this. 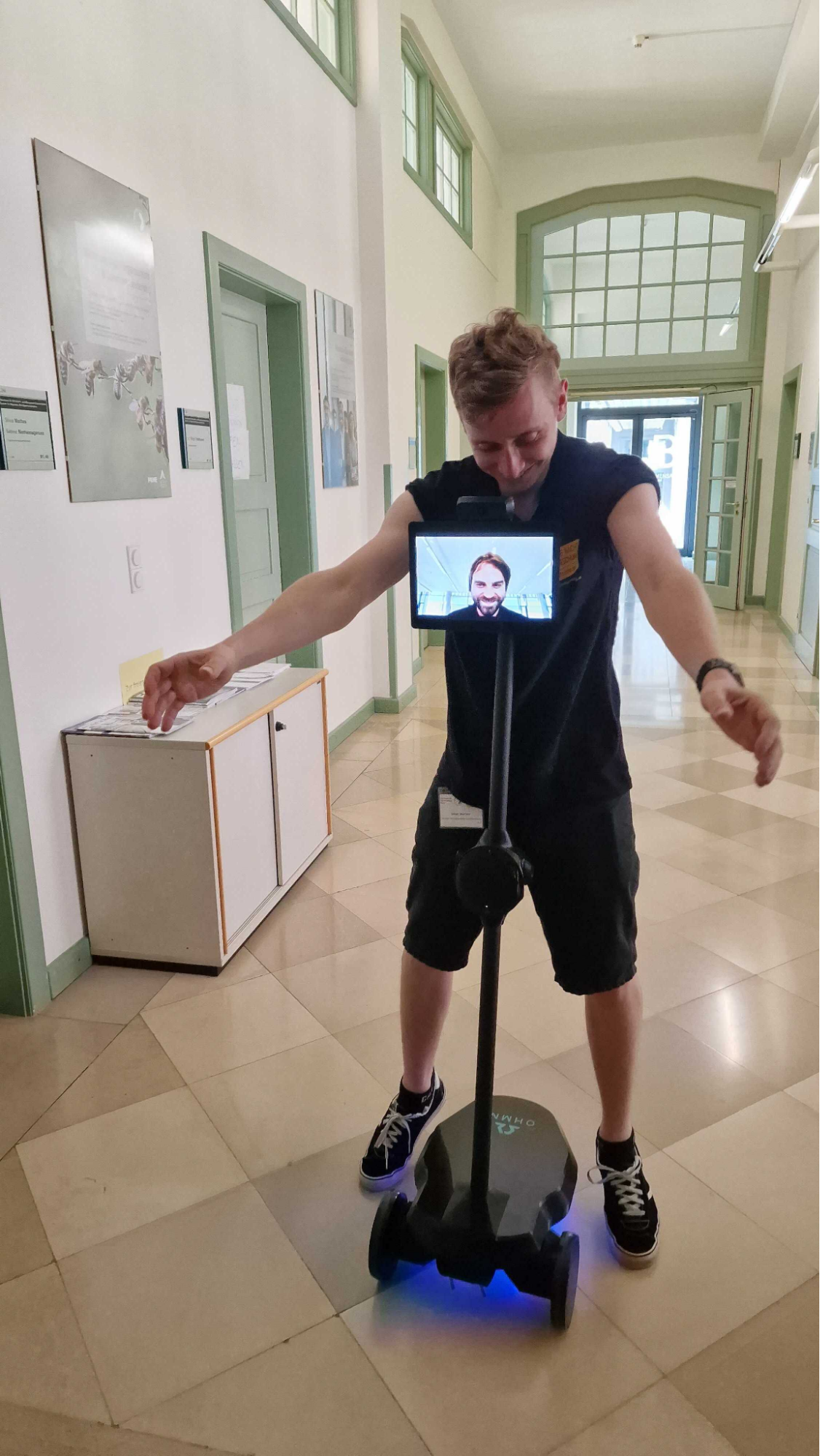 In summary, the idea of providing a TR as a hands-on research station works. It attracts attention, is low-threshold enough (with supervision) to simply try it out and encourages questions to be asked.

And how did the “other side” experienced the event? Here are some impressions: 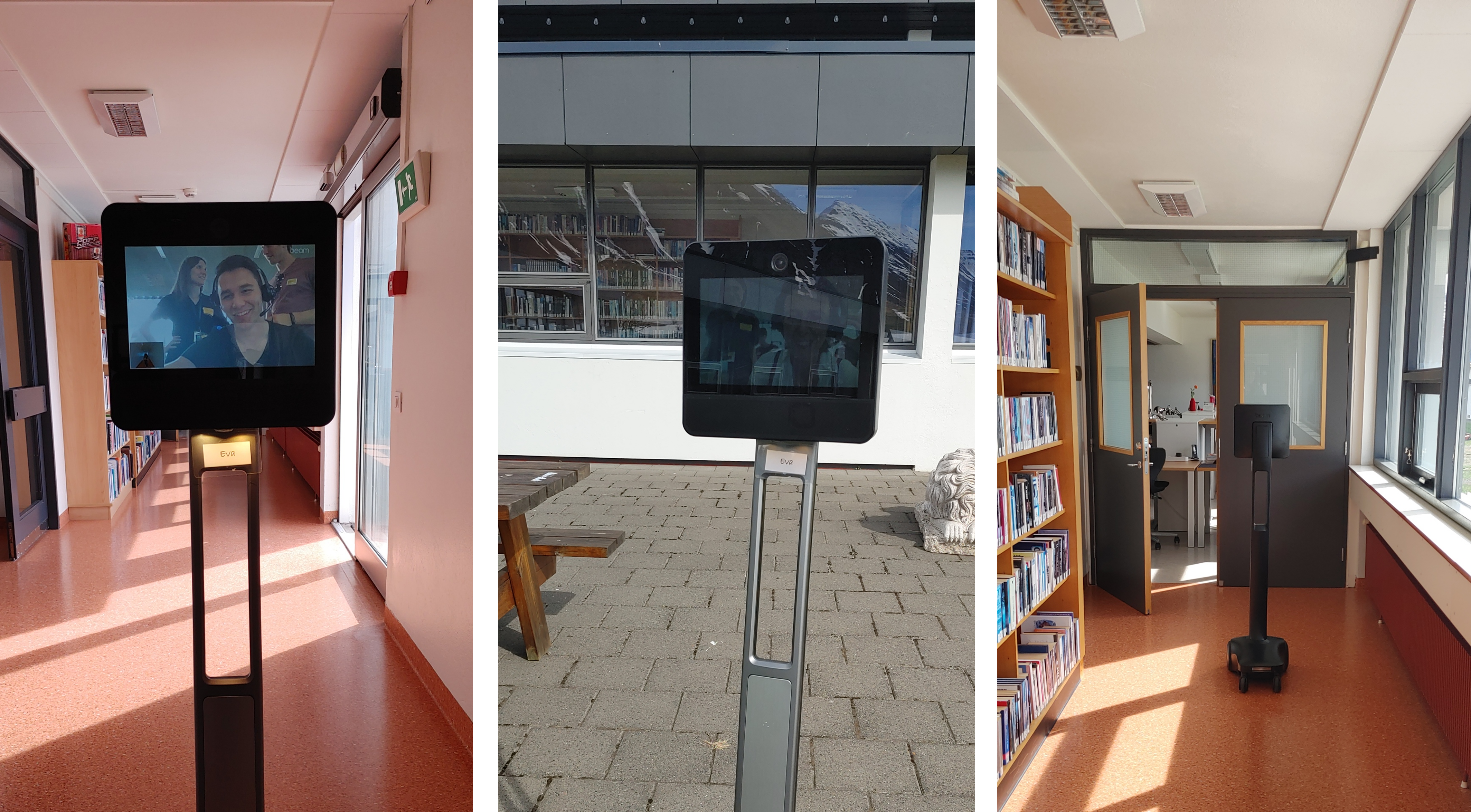 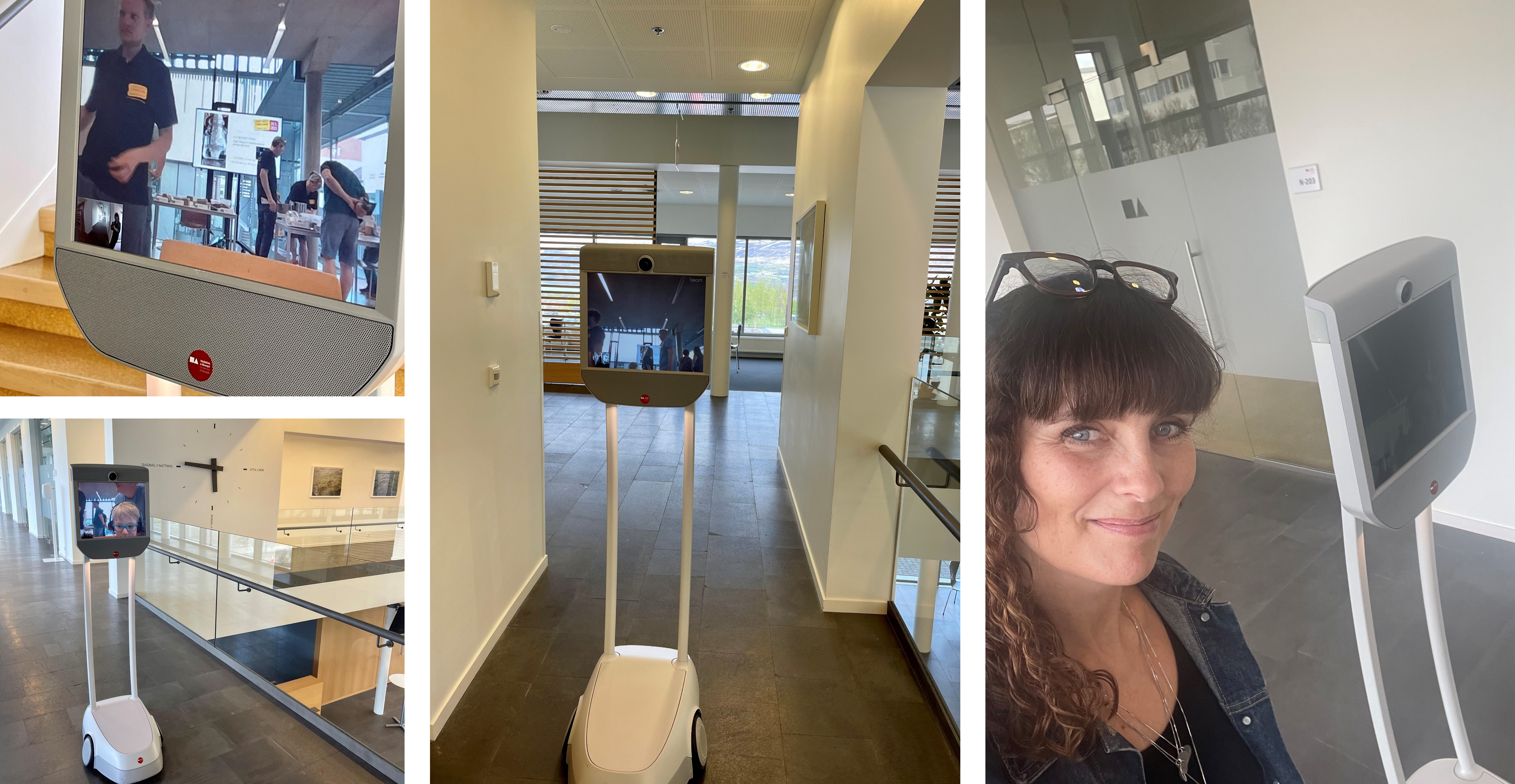 I found it really fun to have visitors coming in the TR, I really enjoyed it.

The guests were exited about visiting Iceland. They found it super easy to control. I asked all the participants how the found it to control the BEAM TR, all but one said it was super easy, one said not so hard. They all seemed to enjoy to drive the TR around campus and some talked about always wanting to visit Iceland. They could most understand how and why we would use it in education.

For the most part, it was total fun and I also felt very privileged to have the opportunity to see small children operating a robot remotely. The best part of all was that almost all of them had a very easy time operating and driving the robot around, which is very encouraging. Even the smallest children with very little guidance could grasp its operation and performed well. In addition, it was my pleasure to see that they did not participate in the event out of obligation to do so, but it was very amusing and recreational for them and for some it seemed that they could go on for an hour or two without interruption. I am feeling very lucky that I had the opportunity to take part in such a well organized event and I hope that I will be able to do so again in the future.