From the beginning of the 20th Century, robots were well-known as a part of Science Fiction. It was only after 1917 when Joseph Capek composed the brief tale Opilec portraying automats and 1921 when his sibling Karel Capek composed the play Rossum’s General Robots (RUR) when the idea of advanced mechanics became popular to the common public.. The idea of distant mechanical activity has for quite some time been perceived to have benefits in a few distinct fields [1].

The term ‘Telepresence’ was first used by Marvin Minsky in a 1980 article. He framed his vision for an adjusted adaptation of the more matured idea of teleoperation that focused on making a remote user feel like they are truly present somewhere else  [7].

Telepresence robots can be portrayed as a mix of three unique areas of innovation, which are robotics, telepresence and teleoperation. Robotics is a field of technology which uses machines operated (or programmed) by humans to perform tasks. Telepresence involves the feeling of being present even though the audience and the speaker are separated by distance. Teleoperation is the activity of controlling a machine or framework from a distance. Thus, the meaning of telepresence robots becomes obvious, which is the control of robots or semi-independent robots from far distances using tethered connections or wireless networks [5] [9]. 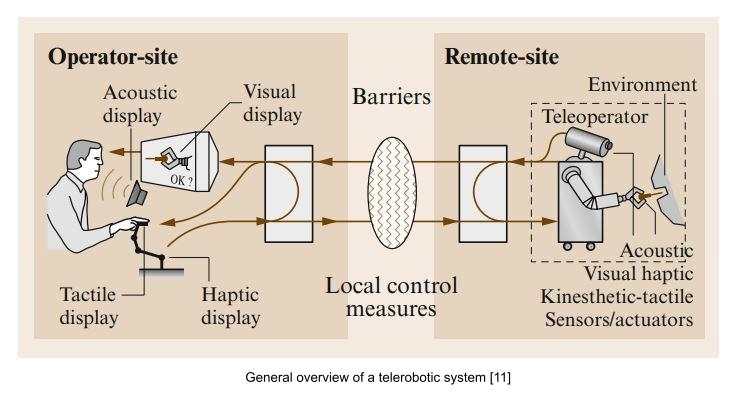 Raymond C. Goertz made the first telepresence robot in 1958. He created systems to handle radioactive materials safely but they were only electrical systems controlled by on-off switches for axes movements. The systems were slow and inefficient to operate. This lead to the use to mechanically linked master-slave components which enabled users to use manipulators via motion or gesture control from a distance. In this way, by using electrically coupled manipulators Goertz laid the foundation for telerobotics. In the 1960’s the concept of supervisory control was introduced to cope up with the effects of time delay in teleoperation  [11]. 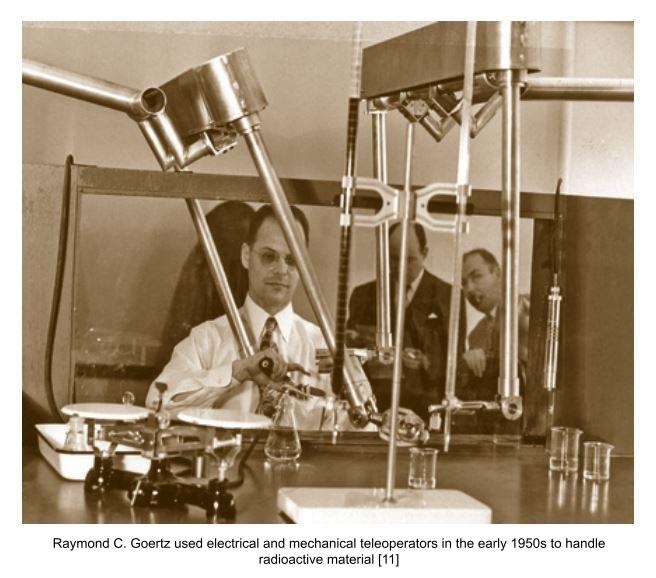 The table below shows few telepresence operations over the 19th to the 21st Century [5] [9].

Basically, a telepresence robot helps to place ‘you’ at a distant area in a flash, giving you a virtual presence, or ‘telepresence’. Telepresence robots are controlled i.e. via a PC, a tablet, or a smartphone and consist of a camera, screen, speakers, microphones and receivers. Both end users interacting with the robot can see and hear each other at the same time. For example, a remote teacher teaching via a telepresence robot can see and hear his/her students and similarly the students can also hear and see their teacher via the robot at the same time. Individuals connecting with the robot can see and hear its administrator and the administrator can at the same time see what the robot is ‘looking’ at and ‘hearing’. A few robots require a tablet or telephone to be appended to the robot, while others incorporate underlying video and sound highlights. It can thus be said that a telepresence robot can be utilized to give yourself a ‘broad’ set of versatile ‘eyes’ and ‘ears’, empowering you to have a distant presence at any area with a web association and they can help to save time and money [3] [6].