TRinE Story: A students’ hands on experience with Telepresence Robot at the University of Macedonia (Greece)

An Overview. What, why, where?

Research staff from the University of Macedonia had been engaged in the experimental use of a Telepresence Robot (TR) during the spring semester of 2022 in the Computer Labs of the Department of Economics. Teams of students in the computer lab had to solve Excel problems during the 90 minutes class. In some teams there was a remote student who  was represented in the computer lab by a TR. The experiment was repeated eight (8) times. This was the first time that such technology has been used in conjunction with course conduction, simulating a real-life situation, where a common problem would have to be solved collaboratively.

The students’ experiences and point of view of the whole process was an integral part of the experiment. For that reason, four separate focus group meetings were carried out, each consisting of 6-8 members. In total 27 students participated in the focus groups discussions.

Most of the students, either as the TR operators, or not,  were more stressed during the beginning of the problem solving stages, because they did not know how they would be effective in solving a problem, when one team member is viewable through a moving robot screen. Questions as how would they be able to communicate effectively via a screen, or how they would be moving among the team members, minimizing the time required to produce a solution, were prominent at this point. However, as the exercise moved on, it seemed that all of the teams quickly picked up the pace, some teams faster than the others, arriving all to a solution of the assigned problem. Unforeseen major obstacles during the exercise were poor wireless connectivity between the TR at the laboratory and the operator at the remote location as well as the poor sound quality.

In the first case, the team would totally lose their pace with the TR, until the operator would reconnect from the remote location. In one case where the connectivity was very poor for a continuous time duration of 5 minutes approximately, the team eventually had to “abandon” the team member from the solution process, until the connection was fully stabilized. After that, they would bring the TR operator up to pace of what has been done until then. This was considered to be an unexpected drawback of the whole process from the students and created a lot of negative emotions among the team, especially regarding the time required to solve the problem.

In the second case, the sound between the team members at the lab (local members) and the TR operator (remote member) was of poor quality. From the point of view of the local members, that happened because there was too much noise in the laboratory from the other students, outside the team members. From the point of view of the remote member, the most common reason of poor sound was that they could hear their own voice as an echo back to them, which in turn created a lot of confusion during their communication with the rest of the team. In both cases, the team members had to repeat themselves many times, leading to increased anxiety, confusion and time required to reach a solution.

Nevertheless, obstacles aside, for the majority of the time the students saw this as a very positive experience, which they learned a lot from and an experience that they might never again have the opportunity to repeat in their life. They considered it very useful, especially for the intended use of the robot, i.e. the need for a student to be present in a classroom where no teleconference capabilities are in place. Also, they would definitely like to either be represented, or participate in a team where somebody else would be represented via a robot again in the future.

“I found the whole experience very interesting and from the beginning I wanted to have the opportunity to work with the robot, either as an operator, or from the lab. Personally, I was very anxious, not only because of the sound or the commotion in the lab, but I was also afraid of not to hit the robot somewhere, or not be able to hear or see something. When I understood the way it works, I think that the anxiety subsided and I found it a little more enjoyable. Especially at the beginning, I felt a bit awkward, but afterwards I almost forgot that I am being represented by a robot. Up to a point, it was fairly easy to use, therefore as a last resort I would recommend its use. It is definitely a lot better than nothing. As an experience it was a challenge in a positive way.

As its comparison with another teleconference technology, if we take into account the poor sound quality, also being reinforced from the noise inside the lab, with a Zoom connection the sound could be better. However, one cannot be sure about that, since if there was also noise during a Zoom teleconference, we might have had the same poor sound quality. With the robot I felt more that I belonged into a team, than I would feel via Zoom. That is because via Zoom one does not know each one’s participation level, whereas with the robot it felt as if I was physically there and not isolated from home. In comparison it was more challenging and interesting collaborating with the robot. I felt like I was physically there and not only because of the movement, but also because of the camera and because I could instantly see and talk to all other three members of the team.”

“I think working with the robot would be different If the exercise was more difficult. In that case I would have to be more alert if the operator would be able to hear me, rather than focusing on the project. That thought would block me a lot. As far as the connectivity was concerned it was good, the sound was good. I found it overall to be innovative and interesting at the same time. However, I would be more anxious as an operator. It also felt familiar with the other team members next to be. I did not feel something different.

Being represented by a robot, I find it to be very distant and cold. You cannot substitute the real life communication, in general I would not like that to happen, but according to the usage circumstances that you have described to us, that one would not be able to participate, it would be the best solution.

Comparing it with other teleconferencing technologies, the truth is that in education would be easier to use your own computer via Zoom. I think that the same work can be carried out with either the computer, or the robot, but I think it would be more expensive with a robot, while via a computer would be a lot cheaper.

I would recommend its use especially for this application and I also think that it would be even more useful in other areas, beyond the educational one.” 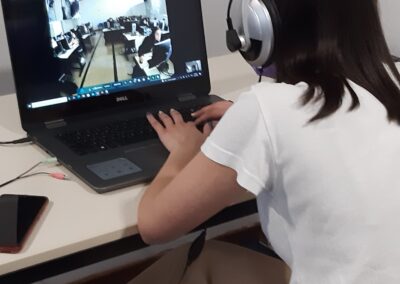 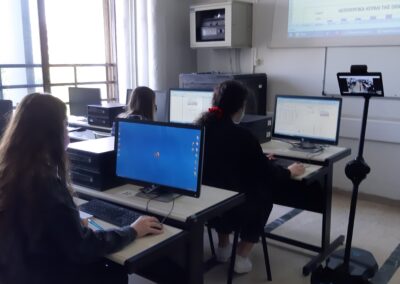 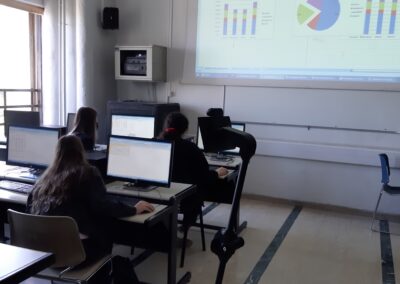